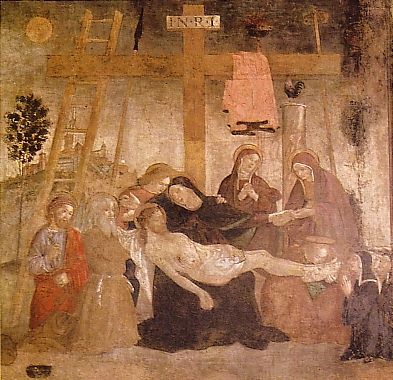 This fresco, which is kept in the refectory of the monastery of Sant'Ambrogio della Massima, depicts the Deposition, and it was executed in about 1490 by Antoniazzo Romano (properly called Antonio Aquili), who was active from 1461 to 1512. He is considered to be the leading painter of the Roman school of the 15th century. Originally the fresco adorned the chapterhouse of the nuns, a room which subsequently formed part of the porch of the church. When the faēade of the church fell down in 1862 the fresco was in danger, so it was detached from the wall and put in a safe place. The fresco is considered to be the masterpiece of the painter, and it is noteworthy for the balance of its composition and the finesse of its design.

The blessed Virgin Mary has the dead Jesus on her lap lamenting her great loss. Saint John tries to console her. The old man supporting the head of Jesus may be Joseph of Arimathaea or Saint Benedict, while the identity of the man behind him remains obscure. The women to the right are "the Three Marys", i.e. Mary Magdalen, Mary, the mother of James, and Mary Salome. Mary Magdalen, who sometimes is identified with the sinful woman in Luke 7:37-50 or the adulteress mentioned in John 8:3-11, is kissing the feet of Jesus. The small female figures at the extreme right are Benedictine nuns in adoration. The Cross behind the persons in the foreground is surrounded by the instruments of the Passion. From left to right we can see the ladder, the lance, the seamless tunic of Christ for which lots were cast, an unidentified object, the pillar of the scourging with the rooster of Peter's denial on top and the stick of hyssop with the sponge with vinegar. The aforementioned man at the extreme left is holding a tool which resembles a pair of pincers, which also are an instrument of the Passion.