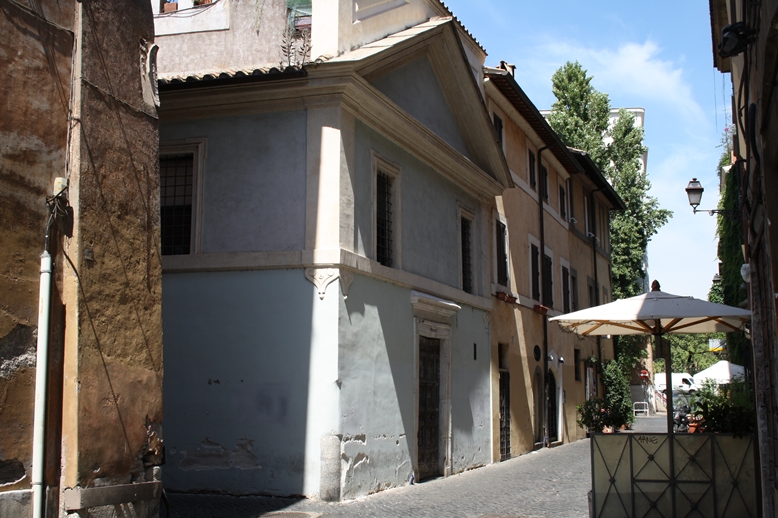 The origins of the church of Sant'Andrea dei Vascellari, dedicated to the apostle Andrew, go back to the pontificate of St. Paschal I (817-824). It is situated at the corner of Via dei Vascellari and Via dei Salumi in Trastevere. The foundation-stone was laid in 822, and in time the church was given the name Sant'Andrea de Scaphis, which alludes to the small boats (it. scafi), which had their moorings by the river Tiber nearby. As a result of an arrangement by pope Gregory XIII (1572-1585) Sant'Andrea ceased to be a parish church in 1574. At the expense of the Universitą dei Mercanti di salumi, i.e. the pork-butchers guild, the church underwent a radical restoration the following year. At this time the church was bestowed upon the Compagnia del Santissimo Sacramento, i.e. the company of the Most Holy Sacrament, which had the church restored in 1666 and embellished it with precious decorations. The existing faēade was built at this time. In the 18th century the church passed on to the Confraternita dei Vascellari, i.e. the craftsmen, who manufactured pottery, ceramics and chinaware, and who had their workshops in the vicinity. The confraternity was dissolved in 1801, and in the course of time the church was abandoned. In 1878 it was considered to be in a state of dilapidation.

Eventually, in 1942, the church was deconsecrated and transformed into a carpenter's workshop. The furnishing and some of the artistic decorations were transferred to the adjacent basilica of Santa Cecilia in Trastevere. In the late 1960s the church became the seat of a catholic youth association, but at present the building again houses a carpenter's workshop. The faēade is rather simple with its moderate renaissance portal and grated rectangular windows. It is crowned by a profiled fronton. The interior consists of one single nave. Two marble columns are to be seen where the altar once stood, and two additional columns stand among planed boards and shavings at the entrance of the church. One of the altar paintings, representing the titular saint with saints Cecily and Mary Salome, is now preserved in the Vatican.