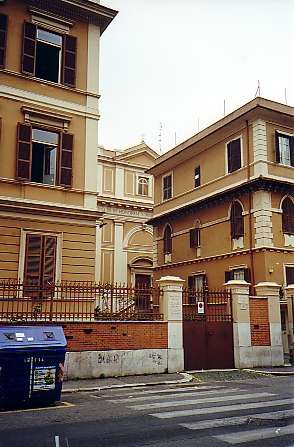 This modern church is located at Via Germano Sommeiller 38, not far from the basilica of Santa Croce in Gerusalemme, and it is dedicated to Saint Marguerite-Marie Alacoque. From the street the church is hardly visible among the conglomeration of buildings. It is situated in the rather vast Esquiline region (in Italian Rione Esquilino), where several churches were built in the second half of the 19th century and in the first half of the 20th century, e.g. Sant'Antonio da Padova, Sant'Elena, Santissima Immacolata and Santa Maria Addolorata.


The foundation-stone of this church was laid in 1922, and it was inaugurated in 1925, but not consecrated until 1950. Its architectural style is somewhat neo-romanesque with an emphasis on Roman arches and a relative disregard of the classical orders. The architects Pietro Picca and Raffaele Pietrostefani designed an interior with a single nave embellished with marble decorations and gildings. The high altar has intarsia works of lapis lazuli, malachite, onyx and alabaster. Cleto Liuzzi painted the high altar painting depicting the titular saint of the church, saint Marguerite-Marie Alacoque, and saints Peter and Paul, Francis of Sales, and Francis Xavier in adoration of the Sacred Heart. Liuzzi also painted the two lateral altar paintings of the Virgin Mary and saint Joseph. The church belongs to the Missionary Zelatrices of the Sacred Heart, founded in 1894 by Clelia Merloni (1861–1930).

In this church the Venerable Antonietta Meo (1930–1937) received her First Holy Communion in December 1936. In 1999 her body was transferred to the basilica of Santa Croce in Gerusalemme.