The photograph of the sumptuous interior shows the high altar (right) and the left altar (left). Filippo Raguzzini designed the interior in the late 1720s, but its present appearance is from a restoration undertaken in 1864.

The painting of the right altar depicts The Baptism of Christ, and is attributed to Pietro Barbieri. We see John the Baptist, vested in a red cloak, in the act of baptizing Jesus Christ, who is partly immersed in the river Jordan. An angel holds the blue mantle of Jesus. 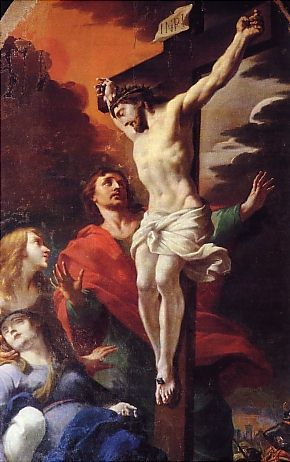 The left altar has a painting of The Crucifixion by Filippo Evangelisti or Marco Benefial. Behind the crucified Jesus Christ, John, with out-stretched arms, is expressing his despair. To the left the Virgin Mary has fainted into the arms of Mary Magdalene. To the right, behind the Cross, we see a thundery sky with dark clouds.