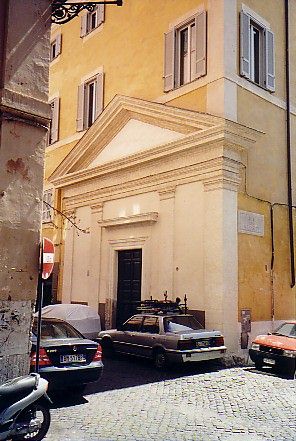 Oratorio della Santissima Vergine Addolorata, in English the Oratory of Our Lady of Sorrows, is located at Via Baccina 58a not far from the well-known church of Madonna dei Monti. The oratory was erected in the 16th century. At first the oratory was dedicated to St. John the Baptist, but in time it was consecrated to Our Lady of Sorrows. The ceiling fresco, which is in poor repair, depicts the Virgin grieving over her dead Son Jesus Christ. The Neo-Classical faēade was built in 1826. For about half a century the oratory was used as a mortuary for the adjacent church of San Salvatore ai Monti, but some time after 1870 it was expropriated by the Italian State. Since then the oratory has been used for various purposes. Its present function is uncertain.