The name of the church
The church of Santo Stefano del Cacco is dedicated to Saint Stephen, deacon and protomartyr of the Church. The present by-name of the church, i.e. "Cacco", was formerly linked to the Roman deity Cacus. A later, more plausible, theory holds, that "Cacco" deals with a statue of the ancient Egyptian god Thot, which is depicted with a dog's head, which was discovered in the ruins of the neighbouring temple of the ancient Egyptian deities Isis and Serapis, the Iseum Campense, built in 43 B.C. The head was interpreted as that of a monkey, and in popular speech it was called the "Macaco", of which comes the philological distortion "Cacco". The most ancient name of the church, Santo Stefano de Pinea, alludes to the fact that the bell-tower is crowned with a small "pigna" (pine-cone), made of white marble. One may also remember, that the church is situated in the 9th region of Rome, the so-called "Rione Pigna".

The history of the church
The building date of the church of Santo Stefano del Cacco is not known for certain, but one assumes that it was erected during the pontificate of pope Hadrian I (772-795). The church was built on the ruins of the temple of Isis and Serapis, from which one reused the twelve columns of the nave. Certainly the church existed at the time of pope St. Paschal I (817-824), who embellished it with an apsidal mosaic. This mosaic, unfortunately lost, depicted the pope with a model of the church. Much later, during the pontificate of Paschal II (1099-1118), two painters, Gregorius and Petrolinus, worked on the absidal decoration of the church.

In 1563 pope Pius IV (1559-1565) assigned the church of Santo Stefano del Cacco to the Padri Silvestrini, the Sylvestrine Fathers (who still serve the church), founded in 1231 by St. Silvestro Guzzolini (1177-1267). (The Sylvestrines follow a rule akin to that of St. Benedict.) The order soon thereafter had the church restored. A more radical restoration took place in 1607, when e.g. the apsidal mosaic of the 9th century was destroyed. In about 1640 the church was transformed into its present baroque appearance. Since then several restorations and renovations have occurred, e.g. in 1725 and 1857. In 1940, in consequence of the amplification of the premises of the central police-station in the neighbouring former monastery of Santa Marta, the church was menaced with demolition, which although could be prevented from being carried out. The interior of the church is at present undergoing another comprehensive restoration.

The architecture and the art of the church
The rather simple two-storeyed façade was probably executed by Antonio Canziani in about 1640. The travertine portal, flanked by pilastres and surmounted by a triangular pediment, was designed by Paolo Maruscelli (1594-1649). The plate above the portal has the following dedicatory inscription: D. STEPH. PROT. CONG. MONAC. / SILVESTRINORVM. The second order of the façade has a window crowned with a segmented pediment and flanking pilastres. The façade per se is crowned with a triangular pediment with a small window, a rather uncommon feature regarding the sacral architecture of Rome. The bell-tower (not visible from the street) dates back to 1160.

The asymmetrical interior has a basilical plan with lateral aisles and chapels. The twelve elaborated columns of the nave come, as stated above, from the temple of Isis and Serapis. The painting of the vault (1857) by an unknown artist depicts The Glory of the Holy Trinity and St. Benedict. The high altar, erected in 1620, is detached from the absidal wall. The apse has some interesting frescoes. The high altar fresco represents the Stoning of Saint Stephen, formerly attributed to Cristoforo Casolani (c. 1582-1630), but recent research has proved it to be a work by Cesare Nebbia (1536-1614). The two lateral frescoes is, for certain, by Casolani. They show St. Carlo Borromeo (left) and St. Francesca Romana (right). Above these three frescoes there are additional frescoes depicting The Holy Trinity (in the middle) and ovals with Saints (at the sides). The gilt stucco decoration (1608) of the triumphal arch and the apse is the work of Rocco Solari. On the counterfaçade is the fine cantory sculpted in gilt wood by Paolo Maruscelli.

The first chapel on the right hand is dedicated to the Guardian Angel and has an altar painting depicting the Guardian Angel leading a small child by the hand, a copy of a painting by Pietro da Cortona (1597-1669). The second chapel, formerly dedicated to the Nativity of Christ, is now consecrated to St. Joseph and has an elaborated barrel-vault. The painting The Death of St. Joseph is by an anonymous 18th century artist. Further along the right aisle is the artistic masterpiece of the church: the Pietŕ by Perin del Vaga. The altar at the end of the aisle has a painted wooden sculpture of the Virgin Mary vested in silk. Legend has it that this sculpture shedded tears upon the eve of the Napoleonic invasion of Rome in July 1796.

The altar at the end of the left aisle has a noteworthy 17th century wooden Crucifix, which partly covers a fresco, damaged by humidity, of Saints Lawrence, Sylvester and Anthony the Abbot. The third chapel on the left is dedicated to St. Matthew and has a small oval cupola with a lantern. The cupola has an Angelic Concert, and its pendentives are decorated with putti with inscription ribbons by Cesare Mariani, a 19th century academic painter of the purist style. Mariani also painted St. Matthew and the Angel above the altar of the chapel. The second chapel, formerly of the founder St. Silvestro Guzzolini, is now dedicated to the Holy Sacrament. It has an altar richly decorated with polychrome marble. The altar painting St. Benedict entrusting St. Silvestro with the rule of the order is attributed to Carlo Maratta (1625-1713). The two lateral frescoes, Miraculous healing performed by St. Silvestro (left) and St. Silvestro receiving the Communion from the hands of the Virgin Mary (right), are by Cesare Mariani. The first chapel of the left aisle is dedicated to the Holy Face of Jesus Christ. It was restructured between 1639 and 1641 with marble and stucco by Giovanni Battista Feraboschi. The altar has a modern painting of the sweat cloth of St. Veronica. The lateral walls have late works by Giovanni Baglione (1571-1644): Saints Carlo Borromeo and Filippo Neri (left) and Saints Stephen and Paul the first Hermit (right).

The sacristy houses several interesting paintings, among others St. Nicholas received in glory by Christ and the Virgin Mary (1695) by Giovanni Odazzi (1663-1731). It was executed for the chapel later dedicated to St. Matthew. There is also the oval painting of St. Aurea being led to her martyrdom by Luigi Garzi (1638-1721) and a refined bozzetto of the Nativity of the Virgin attributed to Sebastiano Conca (1680-1764). Now lost is St. Basil by Giacinto Calandrucci (1646-1707), a disciple of Carlo Maratta. In a hall in the adjacent motherhouse of the Sylvestrine Fathers there is an Adoration of the Magi by the Dutch painter Jan Miel (1599-1664). 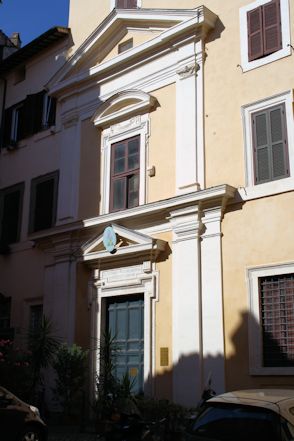 The appearance of the exterior of Santo Stefano del Cacco has undergone radical changes since 1993, when the first photograph was taken. As we can see in the following two photographs, from 2001 and 2002 respectively, Virginian creeper has been allowed to spread itself over the façade of the church and the adjacent buildings. But then again, in 2003, the Virginian creeper is almost gone. The fifth photograph shows the façade of the church as of 2013.

This is a small portion of Giovanni Battista Nolli's (1701-1756) detailed map of Rome from 1748, which shows the church of Santo Stefano del Cacco (no. 1) and its surroundings. Via di Santo Stefano del Cacco opens up in a piazzetta, a small square, (no. 2) in front of the church. To the north the present Via del Pič di Marmo (no. 3) runs, while Via del Gesů (no. 4) is to the west. The now deconsecrated church of Santa Marta (no. 5) with its former monastery (no. 6) faces the vast Piazza del Collegio Romano (no. 7).