The Churches of Via Giulia 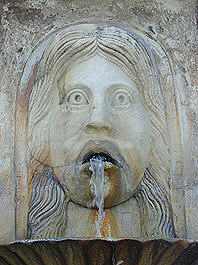 The Roman street of Via Giulia is full of interesting churches. The street is named after Pope Julius II (1503–1513), who commissioned it, and its length is 1 km.

We'll start with the church of San Giovanni dei Fiorentini, the church of the Florentine community in Rome. It is dedicated to Saint John the Baptist, patron saint of Florence, and it is situated at Piazza dell'Oro. The imposing faēade (1734) is the work of Alessandro Galilei, while the interior is a joint work of Giacomo della Porta and Carlo Maderno, who added the transept and the cupola. In this church the baroque architect Francesco Borromini is buried. In fact, he lived nearby. Coming out of this church, you begin to stroll along Via Giulia and soon you will encounter a small church, San Biagio della Pagnotta, built in a rather moderate baroque style with a faēade (1730) by Giovanni Antonio Perfetti. On February 3rd monks are handing out small blessed bread (Italian pagnotta) to the faithful. This church belongs to the Armenian community.

Further on, on the right hand, you'll see Santa Maria del Suffragio, which was completed by Carlo Rainaldi in 1669. The church belongs to a confraternity, which is dedicating itself to help (Italian suffragare) the souls of Purgatory. In an adjacent street, Vicolo della Scimia, is the 16th century Oratory of Santa Lucia del Gonfalone. It has a faēade by Domenico Castelli and an interior full of beautiful mannerist frescoes. Nowadays the church is used as a concert hall.

Get back on Via Giulia. A little further on to the left you will come before the rebuilt church of San Filippo Neri, dedicated to the famous 16th century Roman saint. It was erected in the early 16th century, but it was rebuilt in 1767–1768 by Giovanni Francesco Fiori. In 1940 the Italian dictator Benito Mussolini commissioned a new road to be built between Ponte Mazzini and the Church of Chiesa Nouva, and extensive demolitions were carried out in the area. However, the road was never built.

The next church is on your right. It is Santo Spirito dei Napoletani and belongs to the Neapolitan community. Begun in 1619 it was restored by Carlo Fontana in the early 18th century. The present faēade with an unusual fresco is a 19th century work by Antonio Cipolla. Turn right and walk down the small Via di Sant'Eligio and discover the small beautiful church of Sant'Eligio degli Orefici (i.e. goldsmiths) with its Greek–cross plan attributed to Raphael. Baldassarre Peruzzi added the cupola.

Back on Via Giulia the church of Santa Caterina da Siena will appear on the left. Here the Sienese community has its church. The concave faēade was built by Paolo Posi in 1766. Two more churches to go! On the right hand is the church of Santa Maria dell'Orazione e Morte with an interesting faēade (1737) designed by Ferdinando Fuga. The confraternity of this church dedicated itself to take care of and bury the nameless bodies found in the streets of Rome and in the Roman Campagna. In the crypt you may visit rooms decorated with human bones! Last but not least turn left into Via del Mascherone and check out the church of Santi Giovanni e Petronio dei Bolognesi, belonging to the Bolognesian community. The church was begun in 1582 by Ottaviano Mascherino and renovated in 1805.